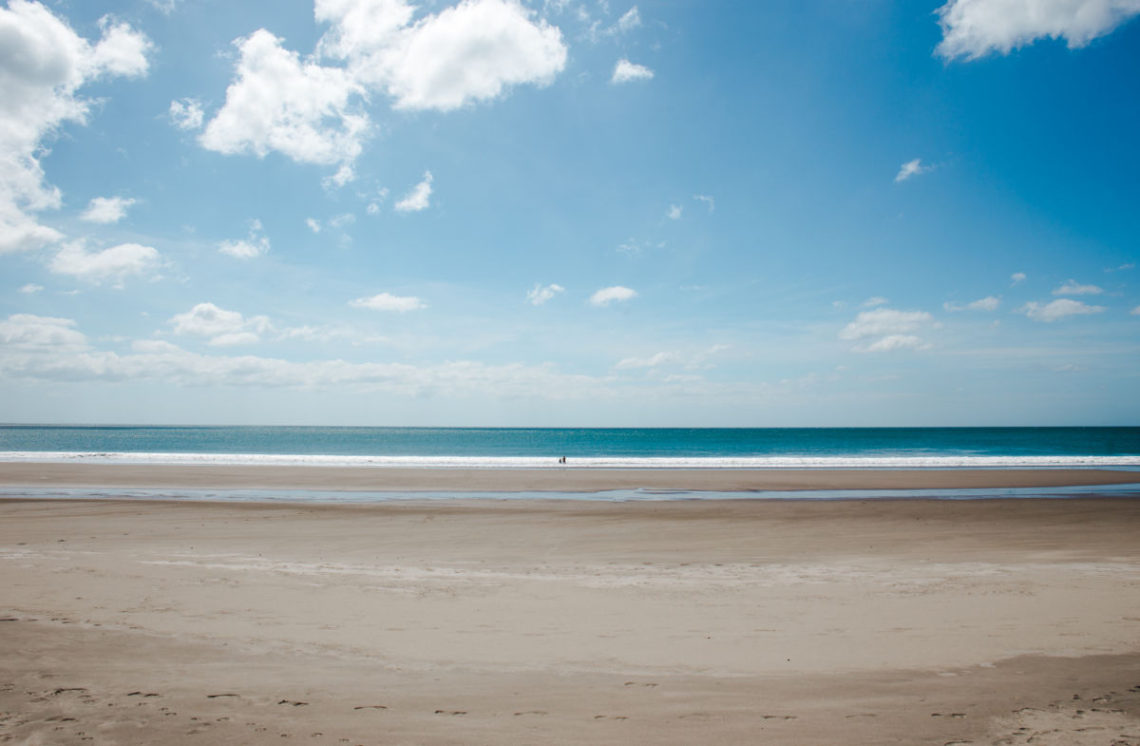 Popoyo, Nicaragua, is less of a surf town and more of a stretch of houses and hostels along the beach. Behind the singular row of beach houses along Playa Popoyo and a smattering of roads north, there’s not much except dirt-road and barrenness until you reach the town of Las Salinas, about a mile away. The beach itself is incredible in Popoyo; Nicaragua has an absolute wealth of beaches along its West coast, but few so coveted for its surfing. Keen surfers come from all over the world to ride the waves of this beautiful coastline, and it’s seen as a perfect place to learn to surf in Nicaragua.

As a non-surfer, I probably didn’t get the full Popoyo experience, but chilling in the sea and walking along the miles and miles of clean sand before sinking some beers as the sun came down sorted me out good and proper. A bit of quiet time in the lull before the storm of a rowdy week in San Juan del Sur was exactly what the doctor ordered. 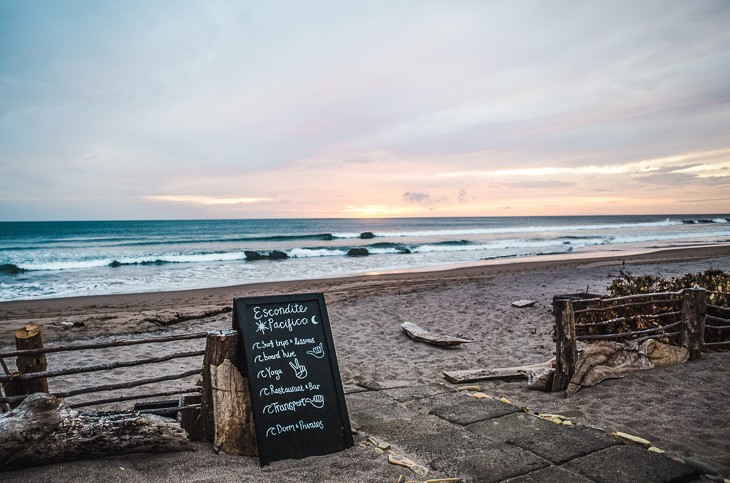 You have to have the right mindset to enjoy your visit to Popoyo; Nicaragua has a huge number of destinations jam-packed with things to do, but this isn’t one of them. However, if you like to seek out places in the world where you can have complete silence if you crave it, but can also meet international backpackers if you feel like it, shimmy on down!

After this guide to Popoyo, Nicaragua, have a gander of these posts:

In terms of safety in Popoyo, it does generally feel safe and secure. However, large sections of the beach aren’t very well-lit past sunset, so take some kind of torch and try not to walk on your own late at night.

There are no ATMs in Popoyo, so make sure you’ve stocked up in your last destination! This might mean a stop-off in Moyagalpa if you’ve stayed in a rural part of Ometepe Island.

7 things to do in Popoyo, Nicaragua

One of the handful of things to do in Popoyo is to learn how to surf. Lots of the hostels along the beach are also surf-houses, such as Big Surf House, so they will have daily lessons for beginner surfers, or you can opt for independent surf teachers. You can expect a surf lesson to start in the range of $10-15 USD, and lots of hostels will offer discounts to their guests or multi-buys. 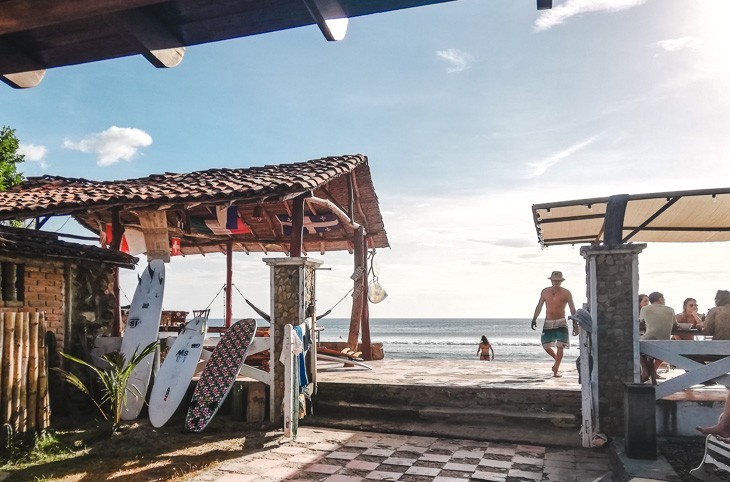 Just as they offer surf lessons, several hostels and surf houses like The One Love Surf Shop offer surfboard rental in Popoyo, and put on daily excursions to beaches with bigger waves for experienced surfers. Popoyo Outer Reef is seen as the most difficult due to its barrel section and challenging reef break. Playa Santana is another favourite for surfers to find interesting waves. You can even book a spot on a boat trip which will take you to all the best beaches to surf during a full-day excursion.

In general, surfboard rental prices tend to be in the region of:

You can also rent rashguards starting from $2. Most surf houses will offer discounts on multi-day board rentals.

Love animals? Love TURTLES?! The Chacocente Natural Reserve will certainly tickle your fancy. Home to 276 species of animal, as well as hatching sites for the Olive Ridley turtle between July and December, this nature reserve is guaranteed to provide an interesting experience. There are several tours on offer there, including horse-riding and visiting community farms. Entry costs $10 USD. 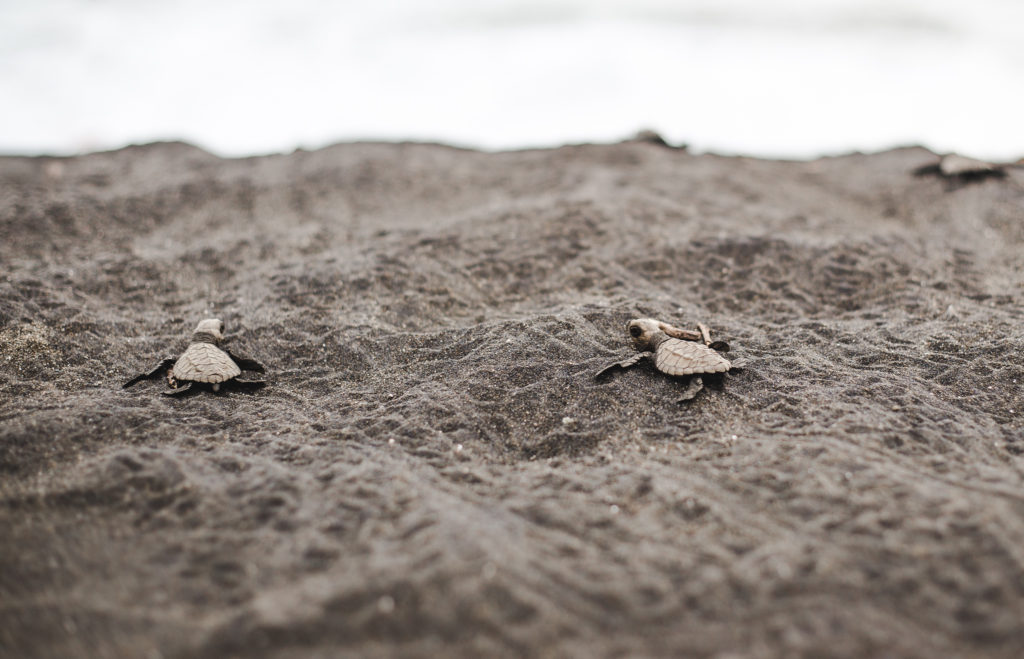 4. Make a splash at the tide pools

Along the beach of Guasacate, about a half-hour walk from Popoyo, Nicaragua’s coastline gets even more magical. Particularly stunning at sunset, Guasacate is home to a series of rock formations that reveal stunning tide pools when the tide is out. Not only beautiful, these tide pools are free to enjoy!

5. Bubble away in the natural hot springs

In Las Salinas, you can soak in sulphurous hot springs for just $3 USD. Though they look like modern swimming pools, the water is perfectly natural to the area. There is a round pool that feeds the others – this one is seriously hot so don’t go in unless you’re mentally prepared for a roastin’.

Even if you’re not a guest at the Big Surf House, you’re always welcome to come and join them for a beer in their beachfront bar. It has a really lovely atmosphere, and people tend to be really open and chatty there, so make some friends, play some pool and awe at the sunset. 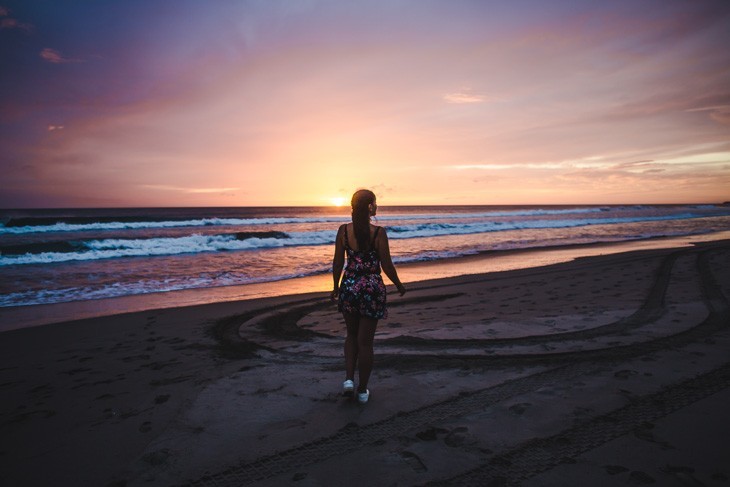 7. Stretch it out with the yogis

With its consistent tranquillity and gorgeous setting, Popoyo is the perfect place for a yoga retreat. You don’t have to go the full hog with a yoga retreat though; you can also find lessons and private sessions put on through establishments along the beach. Magnific Rock hosts lots of yoga options.

Where to stay in Popoyo, Nicaragua

I’d highly recommend a stay at Escondite Pacifico if you’re after something tranquil. Going during a time when tourism in Nicaragua had not yet recovered from the civil unrest of 2018, Popoyo was majorly quiet, and my friend and I were the only guests in this hostel. However, this only made it a more beautiful location, as we swung peacefully in hanging chairs looking out onto the empty beach. The dorm has 10 beds, but 3 showers, 3 loos and SO MUCH ROOM FOR ACTIVITIES. Honestly, most hostels in Nicaragua would cram another 6 beds into that room. There isn’t a kitchen for guests to use, but you can buy dishes from the staffed kitchen. 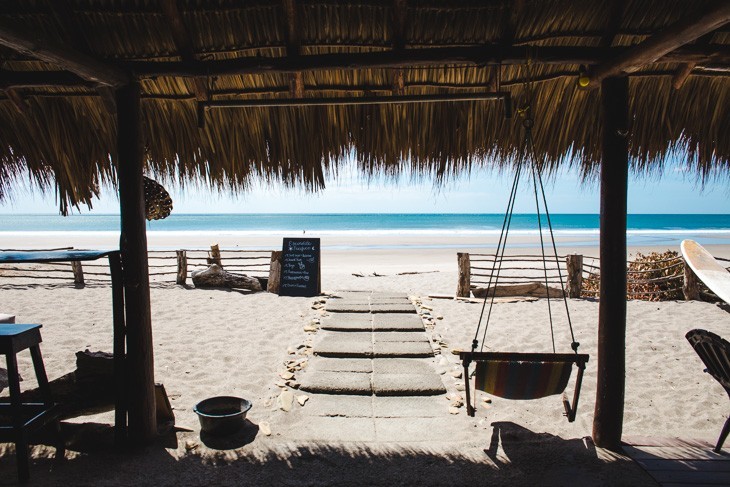 However, I appreciate that lots of people prefer to be around lots of people, and if this is the case the much-mentioned Big Surf House is the place to be. While perhaps not squeaky clean, the hostel is an absolute hub for like-minded travellers, and you’re bound to meet people to spend a few fun days with.

Got a higher budget for something more luxe? Take a look at Casitas Pacific, a crazily high-rated collection of straw-roofed houses in a fantastic location to make the most out of Popoyo.


Where to eat in Popoyo, Nicaragua

There really aren’t a plethora of options of where to eat in Popoyo, and the small convenience store doesn’t give you much of a choice to cook your own meals. A favourite for breakfast and brunch is Duchy’s. It’s close to European prices, and the staff were a little snooty, but I can’t lie that their smoothies are pretty good.

Red Pepper puts on themed nights during the week, including a curry night on Mondays, so look out for those!

For dinner, Viente Este Pizza along the beach is the tetas, though since it’s so popular with backpackers you may have to wait a little for a table. 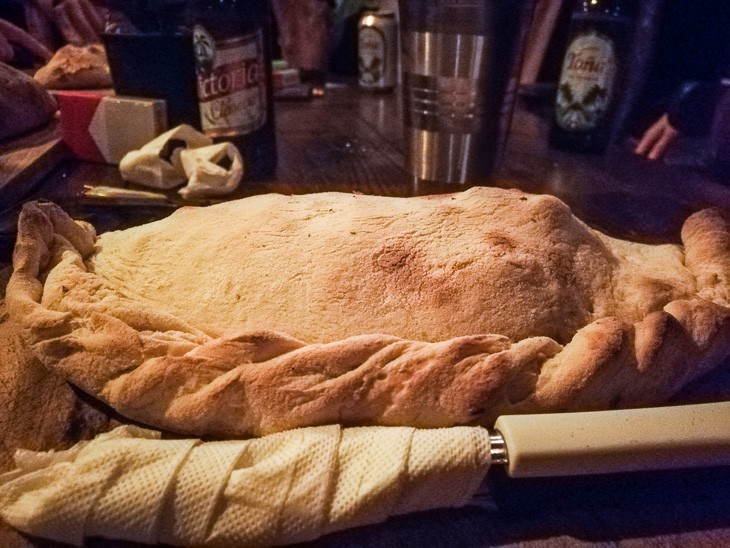 How to get to Popoyo, Nicaragua

The bus terminal isn’t actually in Popoyo, it’s in the nearby town of Las Salinas. To get there from anywhere in Nicaragua, you have to first get to the market town of Rivas (wouldn’t particularly recommend staying a night there, so try to make your connection an early one). From Rivas, the chicken bus should (I repeat, should) cost 50 Córdobas, with an extra 50 for putting your backpack on top of the bus. From there, you can easily pick up a taxi – have a look around for other backpackers who will almost definitely be going to Popoyo, and arrange a taxi share with them.


Alternatively, you can take a taxi from Rivas – or right from the San Jorge port if you just got the ferry from Ometepe Island – for 20-25 USD, depending on how good your negotiation skills are in Spanish. The taxi journey takes around 90 minutes. You can of course also pre-book private transport to Popoyo from all around Nicaragua.

To get around the area surrounding Popoyo, some hostels will offer moped rentals, or you can go big-boy stylee with hiring a motorbike. All hostels will be able to arrange a taxi for you at a pre-negotiated price. A private taxi from Popoyo to San Juan del Sur shouldn’t cost any more than $30 USD.

How long to stay in Popoyo, Nicaragua: 2 days if not surfing, a week if surfing.

Liked this post on the things to do in Popoyo, Nicaragua? 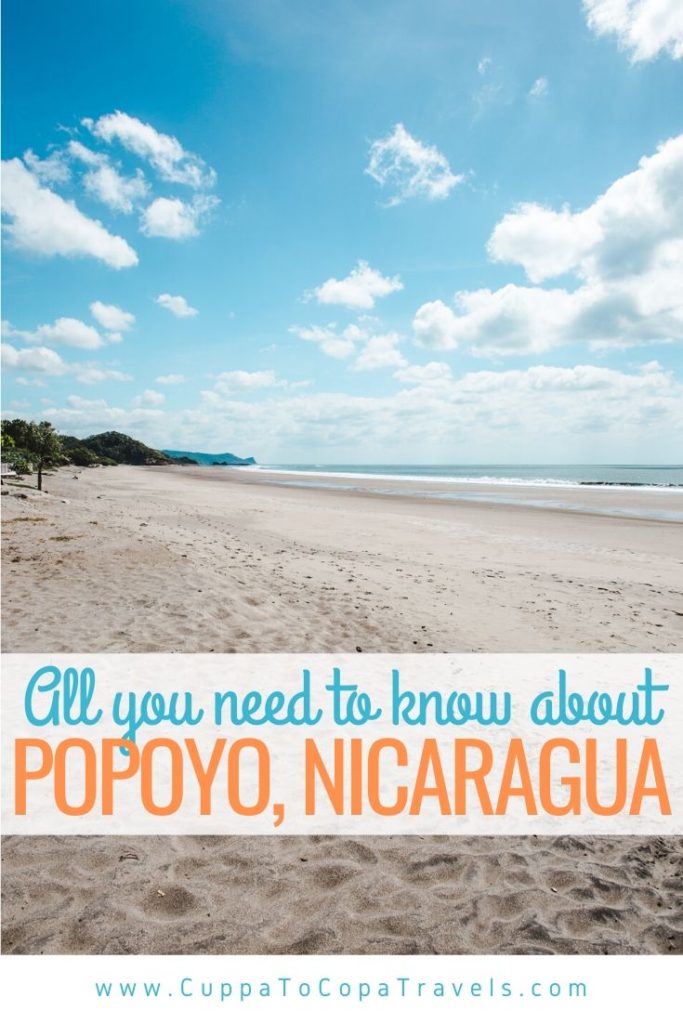 How I funded 26 months of travel: Saving hard & making money on the road 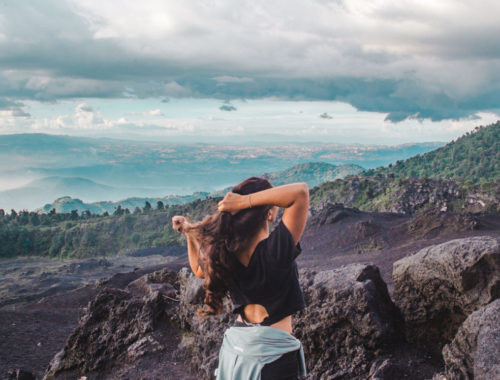 The Ultimate Bucketlist for Backpacking in Guatemala 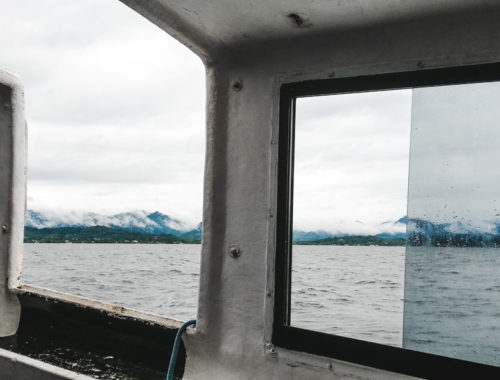 How to get from Belize to Honduras by boat 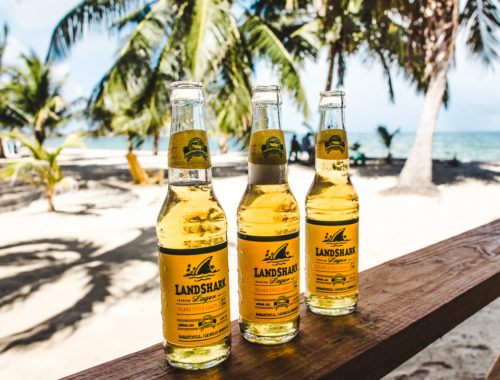 Placencia: the once-sleepy village along the best beach in Belize