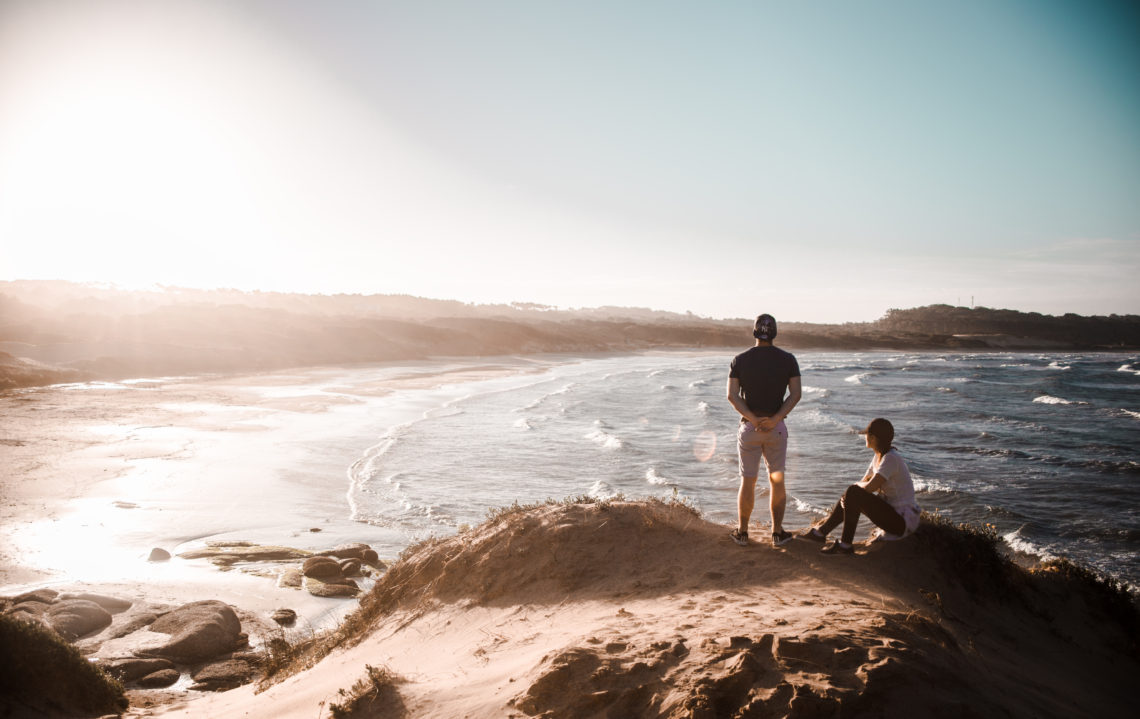 Just 5 hours by bus from Montevideo, Punta del Diablo is quaint, beautiful and a little touristy, but is on the edge of the Parque Nacional de Santa Teresa with lengthy, untouched beaches and stunning greenery. A walk down to nearby Playa Grande is epic. This guide will give you info on Punta del Diablo beaches, accommodation and things to do. 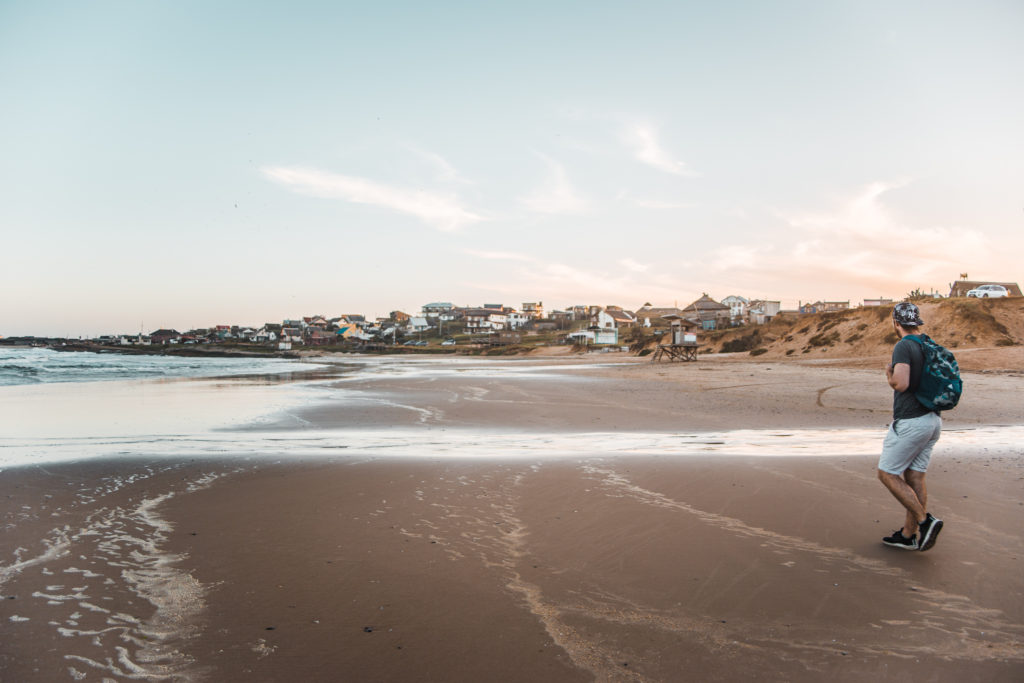 The town is a popular holiday destination for Uruguayans during the summer season (Dec-Jan), so note that lots of things will be closed outside of this high season. We went to Punta del Diablo in October, when things were only just starting to open up again. As of the end of 2017, the only ATM in Punta del Diablo was 11km away, and only open during the month of December, so stock up on cash before you go.

Where to stay near Punta del Diablo beaches

Accommodation in Punta del Diablo tends to be quite pricey due to its combination of tourism popularity and remoteness. There are some simple, cheaper hostels to be found close to Playa de los Pescadores though, such as La Virazón.

If you want to be near the action, and more importantly, near Punta del Diablo beaches, get yourself to the north of Bulevar Santa Teresa, which is the main road in and out of the town. Everywhere else is… serene. Something to remember when staying there is that its suburbia is sprawling. We found a lovely little place to stay which, on the map, looked close to Punta del Diablo beaches, but turned out to be a 30 minute walk into the town, partially through the bush. 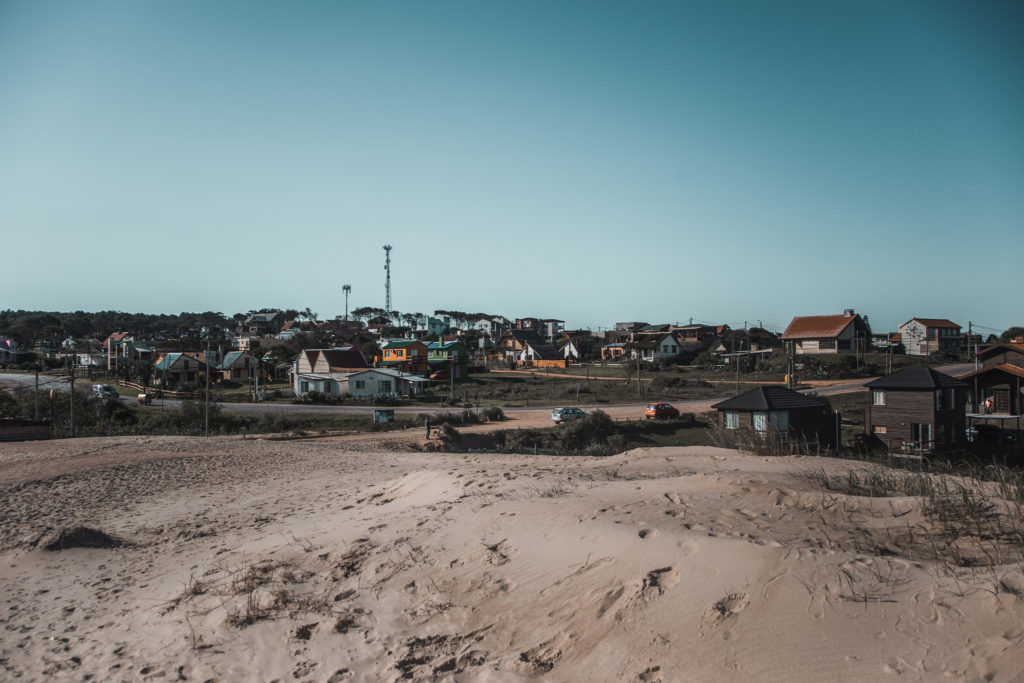 There are lots of really cool looking hostels further out along the main road, but without taxis around (the only way we could get a taxi on a stormy night was to ask the police to call one of their mates up to provide a lift) we wouldn’t book one that didn’t have bikes for hire. Oddly, bikes aren’t available for hire from the main town, either.

The hostel we stayed at was still in the process of being built, but we’re sure that once finished it would be excellent. If you want a simple vibe with eco-friendly dry toilets, an outdoor kitchen hut and gyspy-caravan style glamping pods far from any noise, check out Patas Negras.

Where to eat and drink in Punta del Diablo

If you turn right at the end of Bulevar Santa Teresa, the main road into the town (i.e. when you hit the beach at the peninsula), there is a fantastic little cocktail and smoothie bar called La Barrita de Simón about 5 minutes up that road. There were unfortunately quite a few places we weren’t able to try because we were there in the low season (although things were starting to open back up on the weekend when locals came to visit for a bank holiday), but it seems like it would be a pretty amazing place when busy. There are plenty of restaurants on Avenida de los Pescadores, which looks out onto the most popular of Punta del Diablo beaches.

What to do in Punta del Diablo

For the most part, Punta del Diablo is a place to lie on the beach, relax with an ice cream and watch the local fishermen bring in their daily catch with the help of a horse and cart. 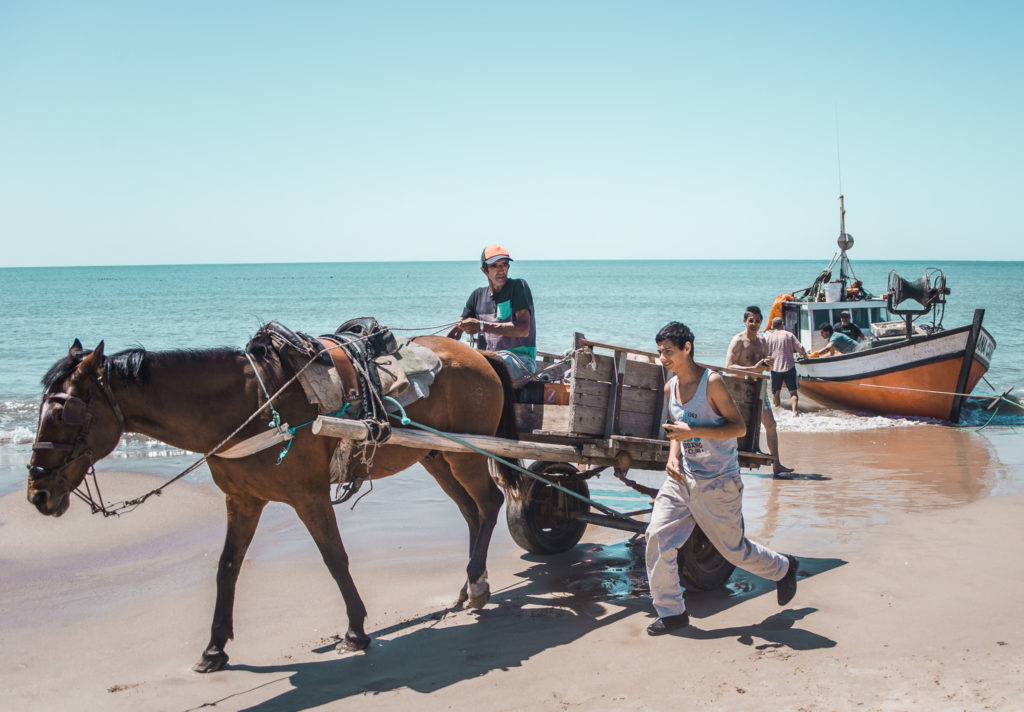 There are several Punta del Diablo beaches to chill on, our favourite being the larger and further away Playa Grande, which is around a 20 minute walk along the coast from the centre of town.

The most popular Punta del Diablo beaches for tourists are Playa de los Pescadores and Playa del Rivero (below); it’s here that you’ll find your souvenir stalls and ice cream sellers. If you want something quieter but still close to town, check out Playa de la Viuda, at the southern side of Punta del Diablo. However, our coolest experience was horse-riding on Punta del Diablo beaches and through forests in the Santa Teresa nature reserve, with the 3 hour ride ending with a gallop along the empty Playa Grande (having never got to more than a canter before, this was both exhilarating and terrifying!).

We also stopped in the forest for a wine and biscuit break and to chat about the cultures of our different countries (there was only one other person on our ride, a Brazilian girl). It was run by El Rancho, which is owned by the same people as our accommodation, Patas Negras, and cost 40USD.

We were then lucky enough to see a wild penguin a metre away from us on the rocks near Playa Grande on the walk home! 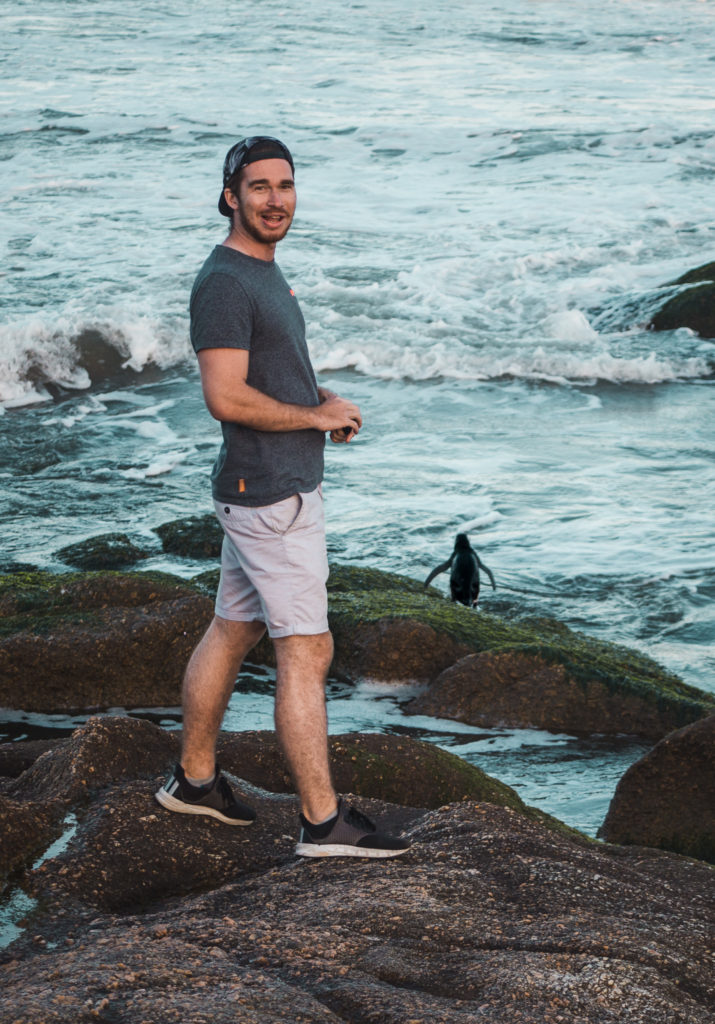 Apart from the long walks and lack of cash machine, the only downside of this town is the dogs. Almost every property has a guard dog, but not all of them are kept on leashes. Luckily, the dogs do seem more territorial towards other dogs (or packs of dogs) than they are to humans, but as someone who is scared of being bitten it made for some antsy walks home at night. On a scale of 1 to Lombok I’d only give it a 3 or 4, but just worth noting that you may want to stick to the centre if dogs bother you a lot. Everywhere else in Uruguay has been fine; Punta del Este is particularly dog-free. Locals tend to look after strays quite well with their ‘nobody’s dog, everybody’s dog’ attitude, which means that you will sometimes get a follower who obediently tags along to whatever you’re doing in hopes of some attention. We had 3 friendly dogs join us for our Cabo Polonio skinny dip!

How long to stay in Punta del Diablo: 2-3 full days

Give it a cheeky pin to read again later! 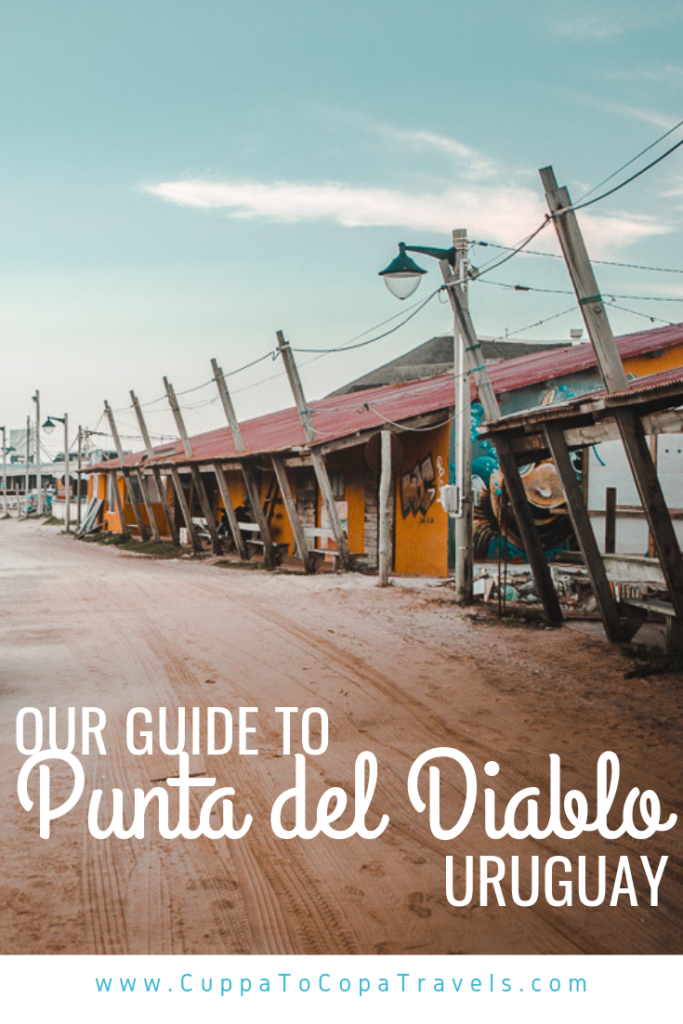 How Easy is Eating Gluten-free in Uruguay? 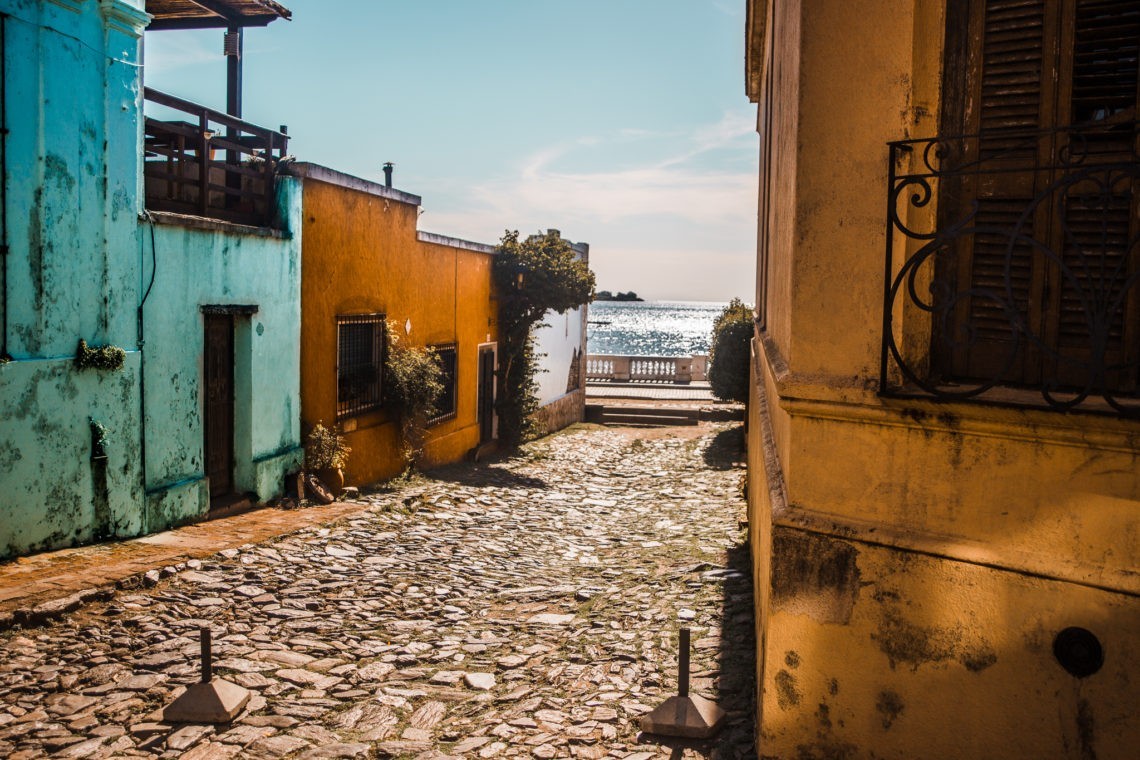 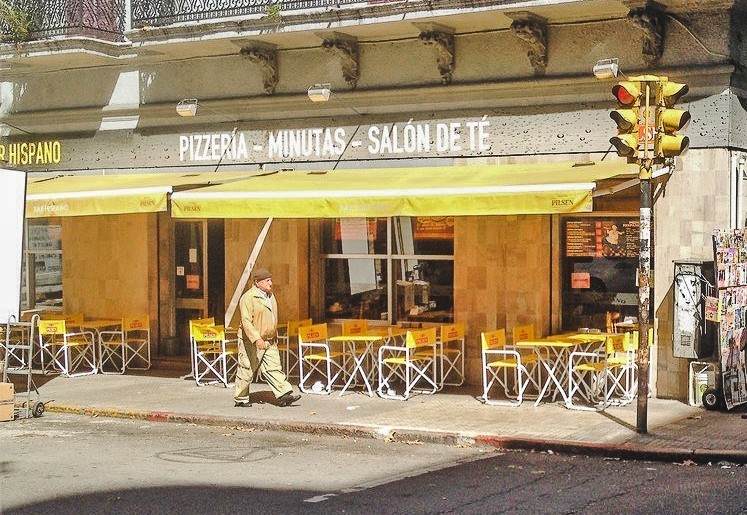 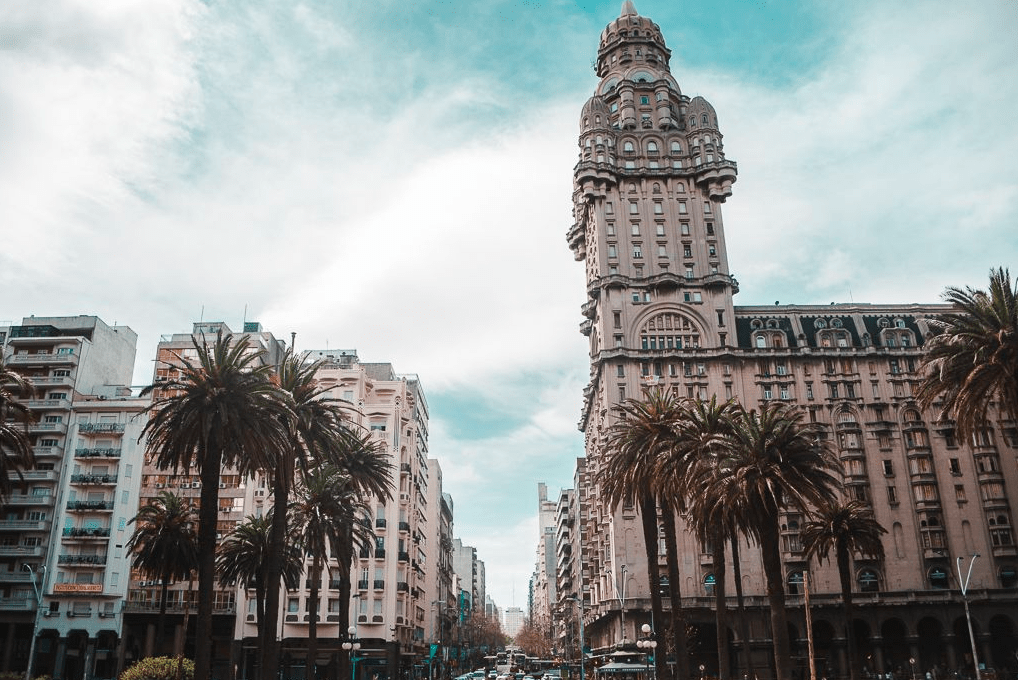 If we only had 2 weeks: Uruguay itinerary